Arbitrary code execution in Animal Crossing has been something I’ve been interested in finding for some time now. After James Chambers informed me about the PAT tag for the NES emulator, which could possibly allow for arbitrary writes to RAM, I had to investigate more. James also mentioned that due to certain restrictions, we could only write a portion of RAM rather than all of it. Writes were also limited in size. He theorized the best way to get around these limitations would be by creating a custom loader. With this knowledge in hand, I set out to do just that.

The basic idea that I had for the loader was simple. Treat the NES ROM as data itself, rather than a ROM. The loader would simply copy the NES ROM Data to a specified location in RAM. The next thing I had to consider were the limitations. Specifically, the ROM loader had to fulfill the following things:

A Deeper Look at the Limitations

Let’s take a break for a moment to breakdown why the limitations mentioned above exist. First, let’s look at the write address limitation. The GameCube’s main RAM is 24 megabytes in size, and starts at 0x80000000. This makes the effective address range 0x80000000 - 0x817FFFFF. So why can the tag only patch to a third of that address? The answer lies in the code responsible for calculating the write address. Let’s take a look at that code: 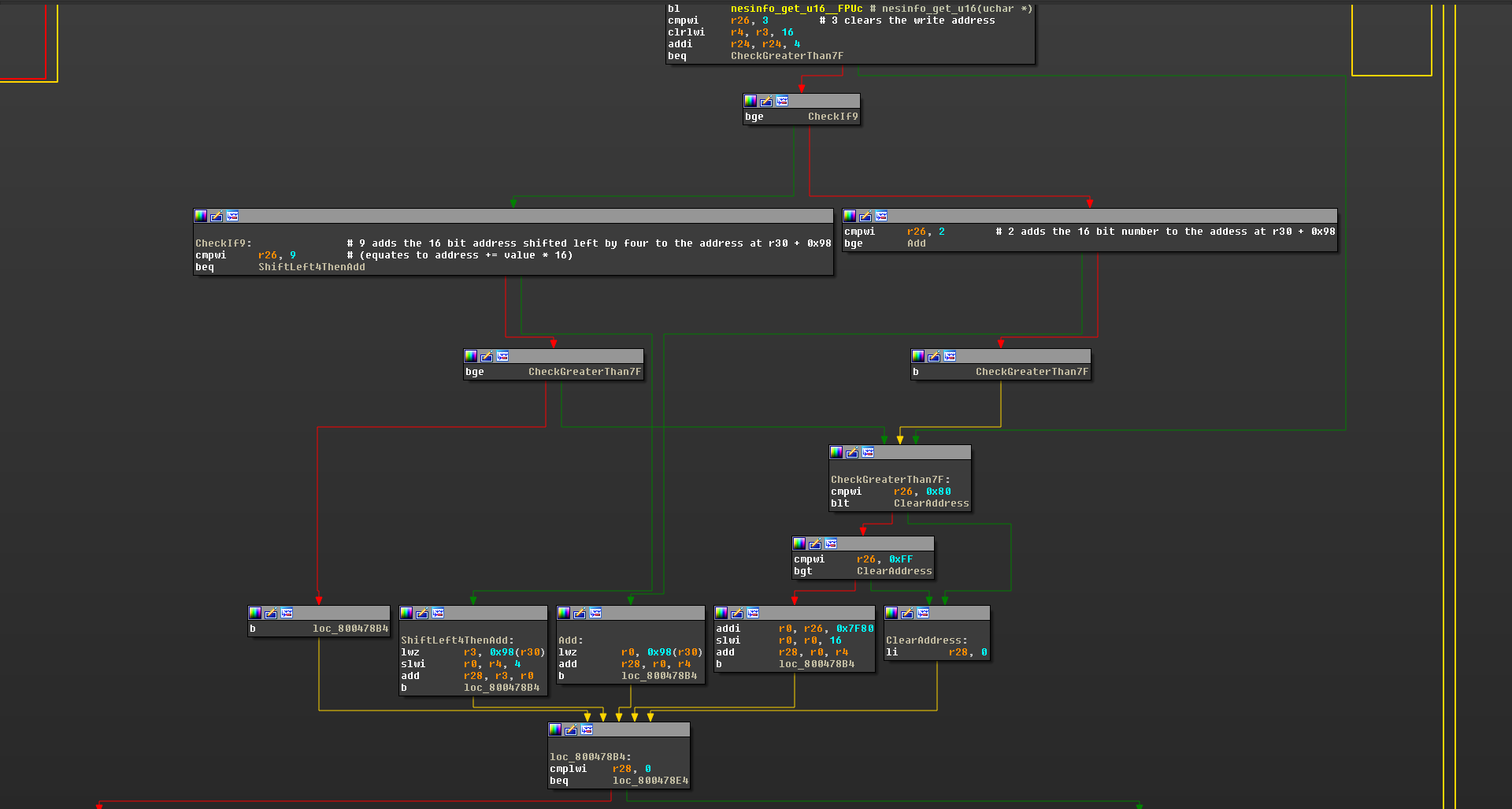 Taking the above code into account, we can see there are four cases that determine how the write address is calcuated. The first one checks if the PAT type is 3. If so, it will clear the address entirely, resetting any address we had before.

The second one checks if the type is 2. If so, it’ll take the next two bytes after the PAT type and use that as a 16 bit value to add to the current patch address.

The third one checks if the type is 9. If so, it takes the next two bytes and shifts it left by four, which is the same as multiplying by 16, and adds that to the current patch address.

The final case checks if the type is between 0x80 and 0xFF. If so, it adds the type to 0x7F80, and shifts it left by 16, then adds the 16 bit value to that. This is where the write problem stems from. Let’s look at what would happen if we set the PAT type to 0xFF and use 0xFFFF as the 16 bit add value!

Finally, that equates to:

That’s how the maximum address is reached. Great. So we now know for sure we can only write to addressess between 0x80000000 and 0x807FFFFF. What about the write size limitation though? To understand that, we need to take a look at the PAT tag structure:

Looking at the structure, we can see that there are two bytes responsible for size. The first one, Size, refers to the entire size of the tag data, minus the Tag type that preceeds it. Since it’s a byte, it can be between 0 and 255 (0x00 - 0xFF). The second size value, CopySize, is how many bytes the emulator should copy during patching. Since we know the maximum size the tag can be is 255 bytes, we can just subtract the size of non-patch data in the struct to figure out the maximum copy size. Since the first size isn’t included, we end up with four bytes of data reserved for calculating the write address.

So that’s where the maximum patch size of 251 comes from! Now that we know our limitations in depth, we can pick where we’ll write the loader to!

As nice as it’d be to just pick 0x80000000 as the patch loader write address, we need to take caution in where we write it to. The lower addresses in RAM contain important game information and code that would likely crash the game if it was overwritten! Knowing this, I fired up Dolphin Emulator in debug mode, and dumped the game’s RAM while it was running. After a short while of searching, I found a large enough section of unused RAM located at 0x80003640. 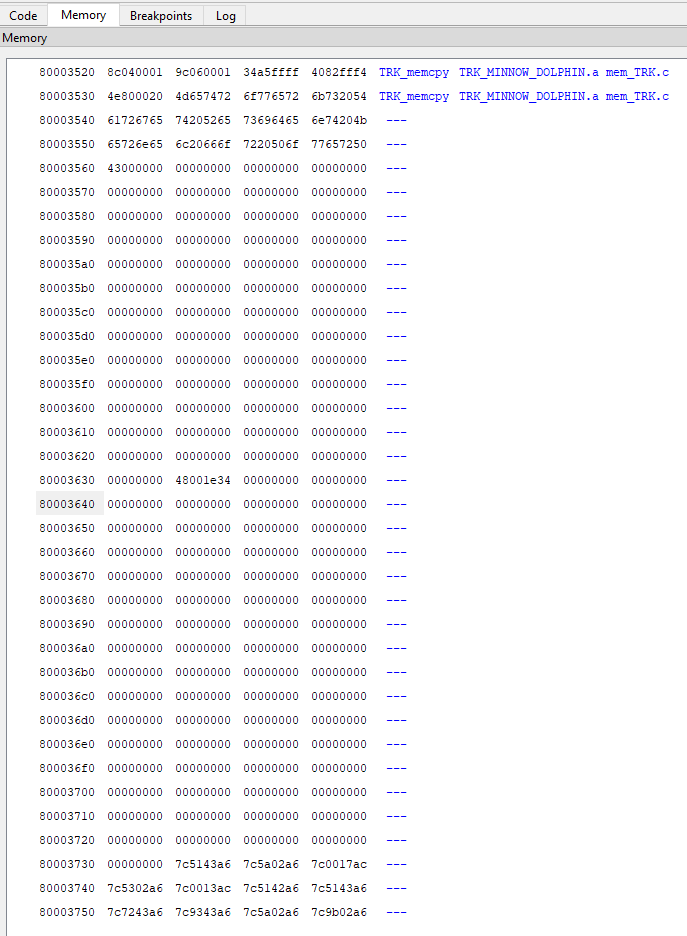 Now that we’ve got an address to write the loader to, we can finally get to writing it.

Since we have limited space, the best language choice for programming the patch loader is PowerPC Assembly. Now that the language has been decided, a standard header for reading the fake NES ROM data would need to be decided on. Originally, I considered just reading data until the first zero byte was hit and then stopping. I ultimately decided against that, as it was very inflexible. I settled on having the NES ROM have a header structure like so:

Let’s break down what each value in the header is for.

WriteAddress is the absolute address in RAM to begin writing to. It can be anywhere in the full RAM range of 0x80000000 to 0x817FFFFF.

PatchSize is the size of the patch data in the fake NES ROM that will be copied starting at WriteAddress.

IsExecutable is treated as a boolean that determines if the patch loader should execute the data it copied. Anything other than 0 for this value will mean it is executable.

The patch data should follow immediately after the header. An example of a patch I made for enabling Zurumode 2 looks like this:

Now we can finally begin writing the patch!

This is the original patch I created:

Looking at it, there are several problems. The first is that the Gekko CPU in the GameCube has an instruction and data cache. If we don’t clear these, any data we overwrite that happens to be cached won’t actually be updated. This causes it to usually fail as the game doesn’t acknowledge we’ve changed the code. The second is overall it’s just bulky and inefficient.

James Chambers took a look at my code and found that we could overwrite a stored function pointer in my_malloc to avoid overwriting code itself. Ultimately I discovered it was better to overwrite the pointer to my_free instead, as it is always called when the emulator ends. I also implemented instruction and data cache invalidations for the addresses the loader writes to. Here’s the final version of the patch loader:

It’s a lot more concise, and works like a charm! Another thing I should mention is that if the patch is marked as executable, r0 will contain the return address of the function who called the patch loader in it. This allows patch creators to return control back to the game by moving it into the LR register!

This knowledge has already been used to do some incredible things. You can check out my video showcasing the first mod I created for it called Letter2Item.

FIX94 also created a homebrew launcher using the exploit, which you can find here.

You can find my ACNESCreator program which can create NES ROM files or the Patch files here.

You can also find a command line version created by James Chambers here.

I’m excited to see what kinds of things people create with these discoveries and programs.